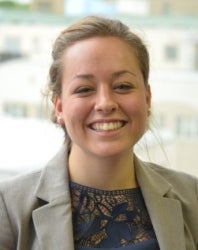 As the second oldest of ten children, Marino grew up in Beantown with the knowledge that her family’s resources had to go a long way. Both of her parents believe strongly in higher education and saved and sacrificed so that their children would have the opportunity. But Eileen’s first choice─Georgetown─would be a major stretch without a generous financial aid package. When she received it, she was thrilled. “I know I want to do something important to help people and that’s going to be easier with a great education,” said Marino.

Marino has declared a major in health care management, with a minor in economics. “I applied to college as a pre-med major, but have since realized that there is a lot more to health care than medicine. I really like the macro perspective of the system as a whole. I have so many ideas for making it more efficient,” said Marino, who is currently interning at the World Bank.

Marino hopes that all donors to Georgetown understand how grateful she and other scholarship recipients are to them. “They are taking kids of out of nothing and giving them a future. It’s an incredible gift.”