Title:Alumni in the Field: Eric Daar

Eric Daar, M.D. (M’85), cared for his first AIDS patient as a Georgetown medical student on rotation. After graduation, he returned to his hometown, Los Angeles, to pursue a residency in internal medicine at Cedars-Sinai Medical Center. Located in the middle of West Hollywood and at the center of the gay community, the hospital quickly became a hub for the HIV epidemic in the 1980s.

“We saw the disease evolve into a global pandemic before our eyes. The disease was affecting my peers, mostly men in their early 30s. It struck close to home,” says Daar.

During residency and the early years of his infectious disease fellowship, Daar cared for many patients with HIV and conducted lab work in HIV-related clinical virology. Soon his research interests resonated with what he saw in patient care. During his fellowship, he was a lead author of a New England Journal of Medicine article characterizing the virology during the early stages of HIV infection.

“In the beginning, we were just trying to support young people who were dying,” he remarks. “Now, if someone living with HIV is doing well on treatment with viral suppression, they don’t have to worry about developing the complications of AIDS. In addition, they can be assured that they won’t transmit HIV to their sexual partners, and with evolving therapeutics it’s possible that in the near future one may only need as few as six days of treatment a year.”

“We’ve learned the importance of working with the community. We need to solve human problems with the help of those affected.”

Now a professor at the David Geffen School of Medicine at UCLA, Daar is chief of the Division of HIV Medicine at Harbor-UCLA Medical Center and principal investigator with the Los Angeles Biomedical Research Institute. He currently leads a multinational study to identify and characterize people with acute infection. The study looks at how very early treatment of HIV infection impacts the size of the viral reservoirs which develop early in HIV infection, and is recognized as a major obstacle to potentially curing people of their infection. His work focuses on catching the disease early and intervening with therapies that could make patients more responsive to potentially curative interventions in the future. In other studies, he tracks patients over time to understand the impact chronic HIV infection has on neurological and cardiovascular complications of infection, which have until recently taken a backseat to the immunological pathology.

Since the early days of the epidemic, much more is understood about how researchers and clinicians can better partner with people living with HIV. “We’ve learned the importance of working with the community,” Daar says. “We need to solve human problems with the help of those affected.”

Advocacy played a major role in advancing HIV research and treatment, he adds. “It changed government behavior and even shifted the FDA perspective, making rapid drug development possible. Working with the community continues to be important in overcoming obstacles. We need to address substance abuse, psychological diseases, homelessness, and healthcare disparities by close linkage with the affected community. This is a problem for everyone, not just those living with HIV.”

Some tools for HIV prevention can have benefits for other public health concerns. “Many HIV and hepatitis C outbreaks have occurred where simple interventions like needle exchange programs would have helped,” Daar notes.

Amidst the devastating losses from the epidemic, Daar also sees some remarkable outcomes. “Defining the biology of HIV, and the relative rapidity of the drug development process, have been extraordinary. The pace of progress—from being universally fatal to universally treatable—came out of new collaborations among government, industry, non-profits, and universities.”

Georgetown made a profound impact on his career, Daar says, as both a physician and researcher, giving him the opportunity to train with infectious diseases faculty like Tom Cardella, M.D. (C’60, R’65), at D.C. General. “My four years at Georgetown were instrumental to everything that I am, and everything that I’ve become.” 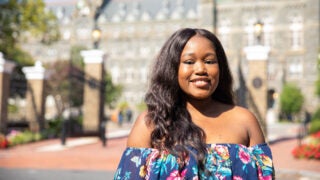 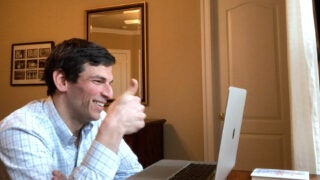 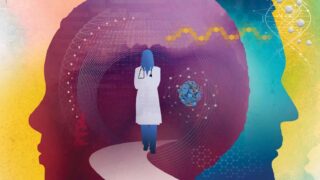